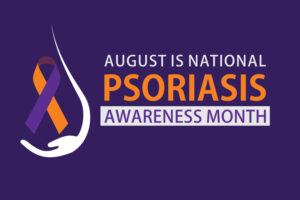 Psoriasis is a condition characterized by scaly, red, and raised patches on the skin, especially on the elbows, knees, and scalp; however, it could also affect other areas in the body. Psoriasis often causes itching, burning, and stinging in affected areas. Though its etiology is unclear to medical experts, psoriasis occurs when the life cycle of skin cells increases, causing a buildup of excess skin cells that form red patches and scales. Scientists believe that genetics and the immune system are contributory factors to the development of psoriasis.

Psoriasis affects people differently, with varying levels of severity. For severe cases, 10% or more of the patient’s skin may be affected by the disease. In mild cases, less than 3% is affected by psoriasis; however, psoriasis affects between 3% to 10% of the skin in moderate cases. Because psoriasis is often cyclical, particular triggers, such as infections, skin injuries, heavy alcohol consumption, vitamin D deficiency, stress, emotional trauma, certain medications, and smoking, may lead to an episode. Thankfully, psoriasis has various treatment options — creams and ointments can clear skin patches in mild-to-moderate cases. Light therapy, including U.V.B. phototherapy, Goeckerman therapy, and psoralen plus ultraviolet A (PUVA), can also be employed. For severe psoriasis, retinoids, methotrexate, and cyclosporine are the drugs of choice.

Common signs and symptoms of psoriasis include:

– A patchy rash that varies widely in how it looks from person to person, ranging from spots of dandruff-like scaling to major eruptions over much of the body

– Rashes that vary in color, tending to be shades of purple with gray scale on brown or Black skin and pink or red with silver scale on white skin

– Dry, cracked skin that may bleed

Psoriasis is thought to be an immune system problem that causes skin cells to grow faster than usual. In the most common type of psoriasis, known as plaque psoriasis, this rapid turnover of cells results in dry, scaly patches.

The cause of psoriasis isn’t fully understood. It’s thought to be an immune system problem where infection-fighting cells attack healthy skin cells by mistake. Researchers believe that both genetics and environmental factors play a role. The condition is not contagious

Many people who are predisposed to psoriasis may be free of symptoms for years until the disease is triggered by some environmental factor. Common psoriasis triggers include:

– Infections, such as strep throat or skin infections

– Injury to the skin, such as a cut or scrape, a bug bite, or a severe sunburn

– Smoking and exposure to secondhand smoke

There are several types of psoriasis, each of which varies in its signs and symptoms:

1. Plaque psoriasis. The most common type of psoriasis, plaque psoriasis causes dry, itchy, raised skin patches (plaques) covered with scales. There may be few or many. They usually appear on the elbows, knees, lower back and scalp. The patches vary in color, depending on skin color. The affected skin might heal with temporary changes in color (post inflammatory hyperpigmentation), particularly on brown or Black skin.

2. Nail psoriasis. Psoriasis can affect fingernails and toenails, causing pitting, abnormal nail growth and discoloration. Psoriatic nails might loosen and separate from the nail bed (onycholysis). Severe disease may cause the nail to crumble.

4. Inverse psoriasis. Inverse psoriasis mainly affects the skin folds of the groin, buttocks and breasts. It causes smooth patches of inflamed skin that worsen with friction and sweating. Fungal infections may trigger this type of psoriasis.

Psoriasis treatments aim to stop skin cells from growing so quickly and to remove scales. Options include creams and ointments (topical therapy), light therapy (phototherapy), and oral or injected medications.

Which treatments you use depends on how severe the psoriasis is and how responsive it has been to previous treatment and self-care measures. You might need to try different drugs or a combination of treatments before you find an approach that works. Even with successful treatment, usually the disease returns.

Samaritan Senior Care is a locally owned Home Care provider serving the greater Boise and Meridian Area. We have a wonderful team of caregivers who are dedicated to providing the love and support clients need to stay safely in their home or apartment. Services include cooking, cleaning, companionship, personal care, etc., hourly up to 24-hr. Contact us today for a free consultation, we look forward to meeting you